Supply-side considerations for energy use in the healthcare industry include:

Renewable energy is considered to be “environmentally” clean – meaning it is typically non-polluting. It is commonly used interchangeably with "green energy" or "renewable energy." Energy consumers can purchase clean energy or implement renewable sources of energy to help reduce the environmental impacts from their consumption of conventional energy and to support further development of clean energy resources.

Renewable energy sources currently make up about 11 percent of the power utilized in the United States in 2017. 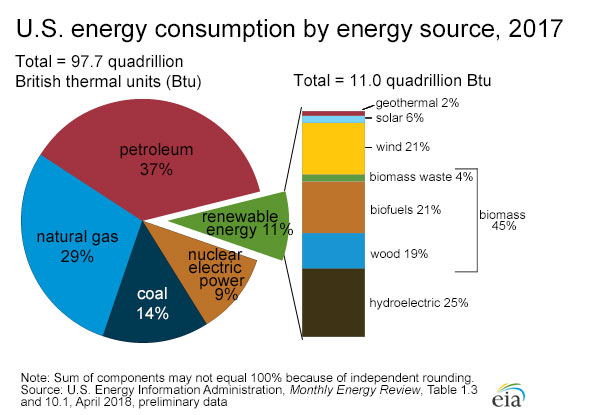 Solar energy is energy derived from the sun. Solar energy is converted into electricity using one of two formats, photovoltaic cell (often called PVs for short), or solar power plants. Photovoltaic cells are group into panels or sets of panels that absorb the sun and change it directly into energy. Solar power plants utilize solar thermal collectors to heat water to steam which then powers the generator that produces electricity. While solar power does not have a significant environmental footprint beyond manufacturing the PVs or solar plants themselves, two challenges include a lack of consistent sunlight in all regions and locales where solar power might be utilized and the need for a large surface area to absorb the sun in order to produce energy at a useful rate.

Wind power utilizes moving air to turn a wind turbine which then turns an electric generator which generates electricity. Currently, 1.3 percent of U.S. energy is produced using wind sources. The consistency of windy conditions to power generators can be problematic, depending on the region. Wind farms also require careful planning and some pushback has occurred from bird advocates concerned about migration routes and bird kills, as well as local communities that see the wind turbines as negatively impacting their views or scenery.

Biomass is a renewable energy source because we can always grow more trees and crops, and waste will always exist. Some examples of biomass fuels are wood, crops, manure, and some garbage.  When burned, the chemical energy in biomass is released as heat. If you have a fireplace, the wood you burn in it is a biomass fuel. Wood waste or garbage can be burned to produce steam for making electricity, or to provide heat to industries and homes. Commercialization of this technology includes biomass boilers for commercial buildings.

Hydropower is the renewable energy source that produces the most electricity in the United States. It accounted for 7 percent of total U.S. electricity generation and 25 percent of generation from renewables in 2017. There are thousands of hydropower dams in the United States located on many of our most important rivers and streams. These dams can create pollution-free energy, but they can also produce significant adverse impacts on fish and wildlife and other resources.

Power purchase agreements (PPAs) are contracts between two parties, one who generates electricity for the purpose of sale (the seller) and one who is looking to purchase electricity (the buyer). There are various forms of PPAs; these are differentiated by the source of energy harnessed (solar, wind, etc.). Financing for the project is delineated in the contract, which also specifies relevant dates of the project coming into effect, when the project will begin commercial operation, and a termination date for which the contract may be renewed or abandoned. All sales of electricity are metered to provide both seller and buyer with the most accurate information about the amount of electricity generated and bought. Rates for electricity are agreed upon in the contract between both parties to provide an economic incentive for creating the PPA.

In the case of Renewable energy certificates (RECs), (Green Tags, Green Certificates, Clean Energy Certificates) the standards require certificates to represent new clean generation that would not otherwise exist or be built without the RECs being sold. In some states, the best indicator of how much a purchase will contribute directly to the development of more renewable energy is the percentage of the product that is classified as new. New renewable energy facilities are generally considered to be those created after 1997.

When a consumer purchases new RECs, those RECs are retired. Because these purchased RECs have been taken out of circulation, electricity suppliers can’t use these same RECs to fulfill their legal obligation under the Renewable Portfolio Standard. They then need to get RECs from other renewable energy facilities. One goal of voluntary clean energy programs is for more renewable energy facilities to be built than the Renewable Portfolio Standard requires.

Currently, because of a shortage of renewable energy generating facilities, energy suppliers are having difficulty obtaining a sufficient supply of new RECs to meet their obligations. In a situation like this, some Renewable Portfolio Standards require them to make an Alternative Compliance Payment (ACP) which will be used by the issuing state to help develop renewable energy facilities. Because of the difficulty of sitting and financing renewable energy power plants in some regions, it can be hard to know how soon a given renewable energy facility will be built due to any particular entity’s REC purchases. Yet, at a minimum, a purchase of new RECs increases the amount of money the state will have to spend through the Alternative Compliance Payment fund.